Later models are ﬁtted with a ﬁlter gauze at the inlet to the ﬂoat chamber. To remove the ﬁlter gauze unscrew the banjo bolt (22), the banjo can then be removed and the ﬁlter gauze withdrawn from the needle seating. Ensure that the ﬁlter gauze is undamaged and free from all foreign matter. Before replacing banjo turn on petrol tap momentarily and see that fuel gushes out.

* On Monobloc types there are bleed holes in the needle jet which serve the double purpose of air compensating the mixture from the needle jet and allowing the fuel to provide a well outside and around the jet which is available for snap acceleration.

Flooding may be due to a worn needle or a leaky ﬂoat, but nearly all ﬂooding with new machines is due to impurities (grit, ﬂuff, etc.) in the tank —so clean out the ﬂoat chamber periodically till the trouble ceases. If the trouble persists, the tank might be drained, swilled out, etc. 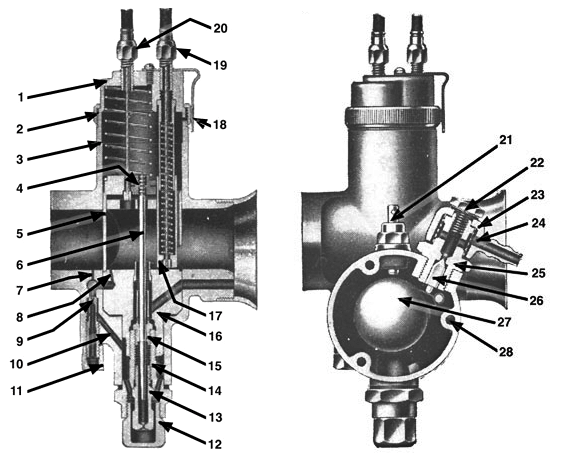 See that the washer on the bottom of the jet block is in good condition otherwise fuel will leak across its face causing rich erratic running if the washer is faulty it should be replaced by a new one. When replacing the throttle see that the jet needle goes into the centre hole in the jet block and once in, note the throttle works freely when the mixing chamber cap (2) is screwed clown ﬁrmly and held by spring (18).

When re-assembling the ﬂoat see that the narrow leg ortion of its hinge is uppermost, as this operates the needle. Care should be taken to see that the joint faces of the side cover and body are not damaged or bruised andthat the joint washer is in good condition, otherwise difficulty will be experienced in making a petrol tight joint.

See that there is a minimum of backlash when the controls are set back and that any movement of the handlebar does not cause the throttle to open. The adjusters are on the top of the carburetter. See that the throttle shuts down freely.

Adjust in the following order.

Note. The carburetter is automatic throughout the throttle range - the air valve should always be wide open except when used for starting or until the engine has warmed up. We assume normal petrols are used.

Read remarks on pages 63 and 66 for each tuning device and get the motor going perfectly on a quiet road with a slight up gradient so that on test the engine is pulling.

If at full throttle the engine runs “heavily" the main jet is too large.

If at full throttle by slightly closing the throttle or air valve the engine seems to have better power, the main jet is too small.

With a correct sized main jet the engine at full throttle should run evenly and regularly with maximum power.

If testing for speed work ensure that the main jet size is sufﬁcient for the mixture to be rich enough to keep the engine cool, and to verify this examine the sparking plug after taking a fast run, de-clutching and stopping the engine quickly. If the plug body at its end has a cool appearance the mixture is correct : if sooty. the mixture is rich : if however there are signs of intense heat, the mixture is too weak and a larger main jet is necessary.

If, as you take off from the idling position, there is objectionable spitting from the carburetter, slightly richen the pilot mixture by screwing in the air screw sufficiently, but if this is not effective, screw it back again, and ﬁt a throttle with a smaller cut-away. If the engine jerks under load at this throttle position and there is no spitting, either the jet needle is much too high or a larger throttle cut-away is required to cure richness.

The needle controls a wide range of throttle opening and also the acceleration. Try the needle in as low a position as possible, viz., with the clip in a groove as near the top as possible; if acceleration is poor and with air valve partially closed the results are better, raise the needle by two grooves; if very much better try lowering needle by one groove and leave it where it is best. If mixture is still too rich with clip in groove No. 1 nearest the top—the needle jet probably wants replacement because of wear. If the needle itself has had several years’ use replace it also.

5th. Finally go over the idling again for ﬁnal touches.

Do not adjust the carburetter to get a very slow tick over, since such a setting will involve the throttle valve having to be opened much further to start from cold, and the consequent reduction of the depression on the pilot system will weaken the mixture and starting will become difﬁcult.

In cases where difficulty is encountered set the throttle stop screw to give a reasonably fast idling speed by screwing the adjuster a little further in. Set the pilot air-bleed screw to give a slightly rich mixture by also screwing it inwards (clockwise) a triﬂe

There are only two possible faults in carburation, either richness or weakness of mixture.

If richness or weakness is present, check if caused by:

Removing the silencer or running with a straight through pipe requires a richer setting.

Having veriﬁed the correctness of fuel feed and that there are no air leaks, check over ignition, valve operation and timing. Now at throttle position shown on page 66, ﬁg. 29, test to see if mixtures are rich or weak. This is done by partially closing the air valve, and if engine runs better weakness is indicated, but if engine runs worse richness is indicated.

To remedy, proceed as follows :

Erratic slow running is often caused by air leaks, so verify there are none at the point of attachment to the cylinder or inlet pipe—-check by means of an oilcan and eliminate by new washers and the equal tightening up of the ﬂange nuts. On later models a sealing ring is ﬁtted into the attachment ﬂange of the carburetter. Also in old machines look out for air leaks caused by a worn throttle or worn inlet valve guides.

Banging in Exhaust may be caused by too weak a pilot mixture when the throttle is closed or nearly closed—-also it may be caused by too rich a pilot mixture and an air leak in the exhaust system; the reason in either case is that the mixture has not ﬁred in the cylinder and has ﬁred in the hot silencer. If the banging happens when the throttle is fairly wide open open the trouble will be ignition - not carburation.

Bad Petrol Consumption of a new machine may be due to ﬂooding, caused by impurities from the petrol tank lodging on the ﬂoat needle seat and so prevent its valve from closing. Flooding may be caused by a worn ﬂoat needle valve. Also bad petrol consumption will be apparent if the needle jet (15) (see Fig. 27) has worn; it may be remedied or improved by lowering the needle in the throttle, but if it cannot be—then the only remedy is to get a new needle jet.

These may affect the jet setting, so if one is ﬁtted afterwards to the calrburetter the main jet may have to be smaller. If a carburetter is set with an air ﬁlter and the engine is run without it, take care not to overheat the engine due to too weak a mixture; testing with air valve (page 66), will indicate if a larger main jet and higher needle position are required.

Effect of Altitude on Carburetter.

Increased altitude tends to produce a rich mixture. The greater the altitude, the smaller the main jet required. Carburetters ex-works are set suitable for altitudes up to 3,000 feet approximately. Carburetters used constantly at altitudes 3,000 to 6,000 feet should have a reduction in main jet size of 5 per cent, and thereafter for every 3,000 feet in excess of 6,000 feet altitude further reductions of 4 per cent should be made. 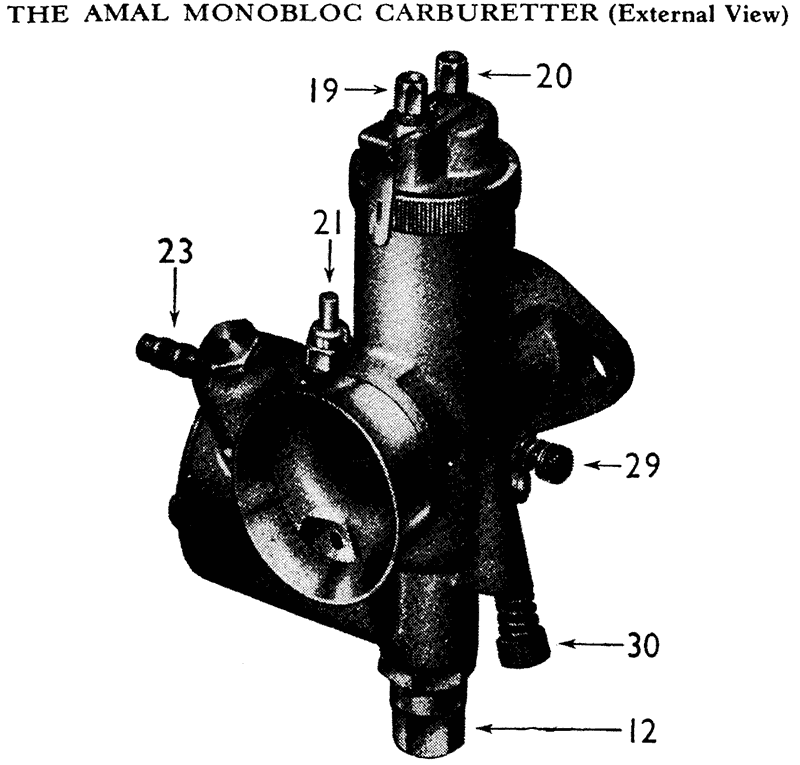