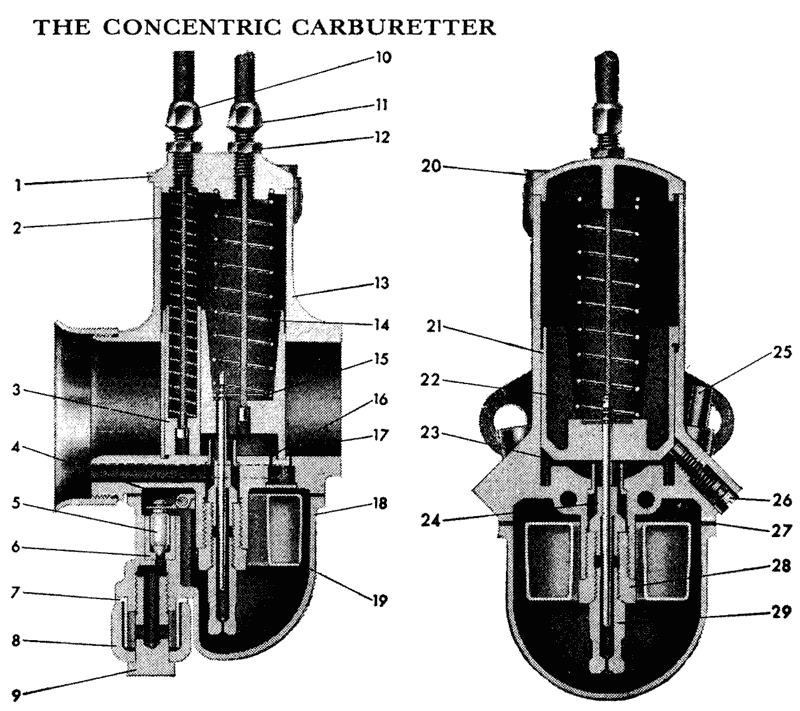 The carburetter proportions and atomises the right amount of petrol with the air that is drawn in by the engine because of the correct proportions of jet sizes and the main choke bore. The ﬂoat chamber maintains a constant level of fuel at the jets and cuts off the supply when the engine stops. The throttle control from the handlebar controls the volume of mixture and therefore the power and at all positions of the throttle the mixture is automatically correct. The opening of the throttle brings ﬁrst into action the mixture supply from the pilot jet system for idling, then as it progressively opens, via the pilot by-pass the mixture is augmented from the main jet, the earlier stages of which action is controlled by the needle in the needle jet. The pilot jet system is supplied by the pilot jet (30) which is detachable on removal of the ﬂoat chamber. On certain other models no pilot jet is ﬁtted but a pilot bush is inserted in the continuation of the pilot air adjusting screw passage. The main jet does not spray directly into the mixing chamber, but discharges through the needle jet into the primary air chamber and goes from there as a rich petrol-air mixture through the primary air choke into the main air choke.How the Carburetter works

The carburetters usually have a separately operated mixture control called an air valve, for use when starting from cold and until the engine is warm; this control partially blocks the passage of air through the main choke.