The Clutch - Method Of Adjustment

In order that the adjustment of the clutch shall be fully under­stood, the following is a brief and simple explanation of its operation. The clutch cable is attached by means of a connecting piece to a form of bell crank lever, the short end of which bears against a thrust pin located in the gearbox housing behind the thrust cup. When the handlebar clutch lever is raised, the cable pulls up the crank, and pushes out the thrust cup, which, being pivoted at one side, opens from the face of the gearbox like a door.

This motion is then transmitted to the front clutch plate by means of a thrust race in the cup and three thrust pins located in the clutch back plate, which bear against the spring holder screwed in the front plate.

It will be seen that the front plate now lifts from one side in a similar manner to the thrust cup, but owing to the design of the thrust race, which has a spherical seat in the thrust cup, so soon as the clutch has completed one revolution, the clutch plates become perfectly aligned and the clutch is freed.

If the foregoing has been carefully followed it is apparent that any adjustment needed is made by screwing the spring holder further into, or out of, the front clutch plate, as may be necessary.

In order that there shall be no load on the thrust race when the clutch is driving, it is necessary that some freedom exists between the thrust race and the thrust pins and this freedom is apparent at the handlebar clutch lever in the form of slack in the clutch outer casing. There should at all times be 3/16" slack at this point.

During the first hundred or so miles running with new clutch inserts these tend to bed down and the free movement in the race gradually decreases, which is indicated by a gradual reduction in the free movement on the cable. It is necessary, therefore, to keep a careful watch on the clutch lever when the machine is new so that as soon as the free movement decreases to an amount less than approximately 3/16", the clutch spring holder should be re-adjusted at once in an anti-clockwise direction to restore the free movement in the operating mechanism. If this adjust­ment is not made when it becomes necessary, the gradual settling of the inserts allows all the play in the race to be taken up and ultimately the clutch thrust cup is forced hard up to the face of the gearbox and the thrust race is subject to a constant thrust load which it is not designed or intended to carry, the pressure on the clutch inserts is correspondingly decreased, clutch slip takes place and damage to the thrust race may occur. It will be understood from this how important is the adjustment, which contrary to the usual practice is not made by means of the cable except in special circumstances. 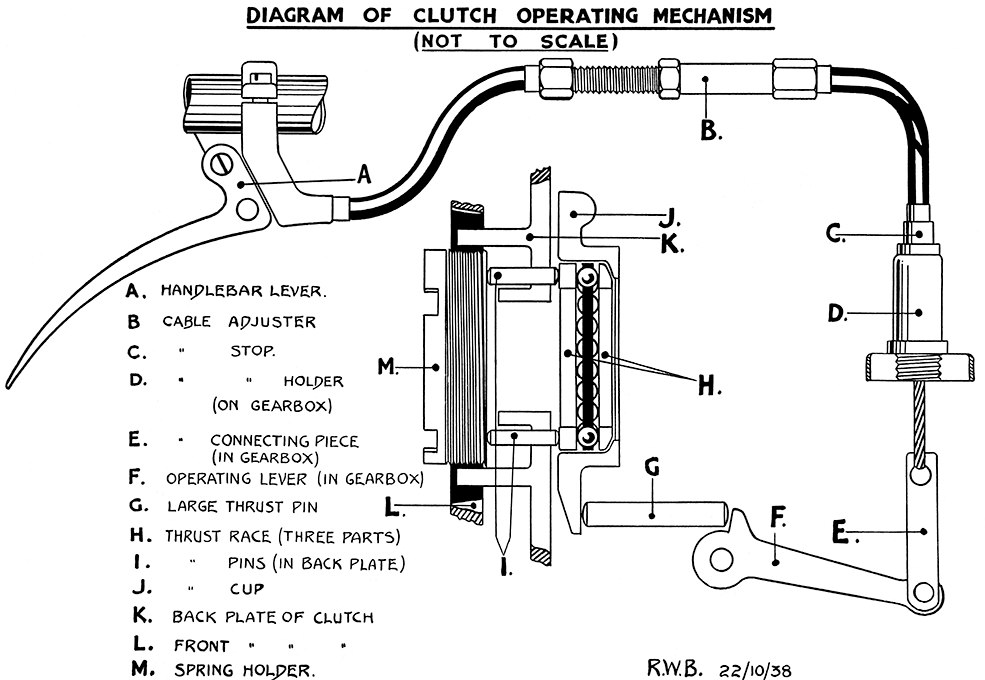 To make the adjustment, take off the circular cover on the front part of the rear chain guard (on earlier models it is necessary to take off the front part of the chain guard). Take from the tool kit the clutch adjusting tool, which is a steel rod of ¼" diameter with a flat at one end. This tool should be pushed through one of the holes in the sprocket so that the end with a flat can engage with one of the serrations in the clutch spring holder (see illustration). It may be necessary to turn the sprocket a little either way if the hole in the sprocket is not exactly opposite to one of the serrations. Having engaged the adjusting tool, the machine should be pushed forward with the gears in neutral until the spring holder has been moved sufficiently in relation to the clutch front plate to restore the free movement in the operating mechanism, which will be indicated by the appearance once more of free movement on the clutch cable. An alternative method is to put the machine on to the rear stand and pull the rear wheel forward.

Should it be found that owing to the adjustment having been neglected the clutch is in a badly slipping condition or if the spring holder is very tight in the clutch outer plate and will not turn without moving the plate with it, second or third gear may be engaged and the differential action of the gears employed to give the necessary relative movement. If this method is adopted it is important to bear in mind that to move the clutch spring holder forward in relation to the clutch plate the back wheel has to be pulled backwards.

In the event of any clutch slip being noticeable whilst there is free movement in the cable, this usually indicates that the thrust cup is hard up against the back of the gearbox and consequently there is no free movement in the thrust race, and the slackness is due to the cable adjuster itself requiring taking up a little. In such circumstances the adjustment on the clutch cable should be attended to first and the free movement removed, and the clutch spring holder should be moved forward to give free movement on the race after the clutch cable adjust­ment has been set. In the ordinary course of events, however, the cable does not require re-adjustment. The cable adjuster is situated between two halves of the clutch outer casing under the petrol tank (on some earlier models adjustment is provided where the cable enters the gearbox).

The presence of oil on the friction surfaces should not cause clutch slip provided that the clutch is adjusted correctly. Although the chain does not require a very large amount of oil to keep it in good condition, we have found by experience that even an excess quantity does not affect the clutch.