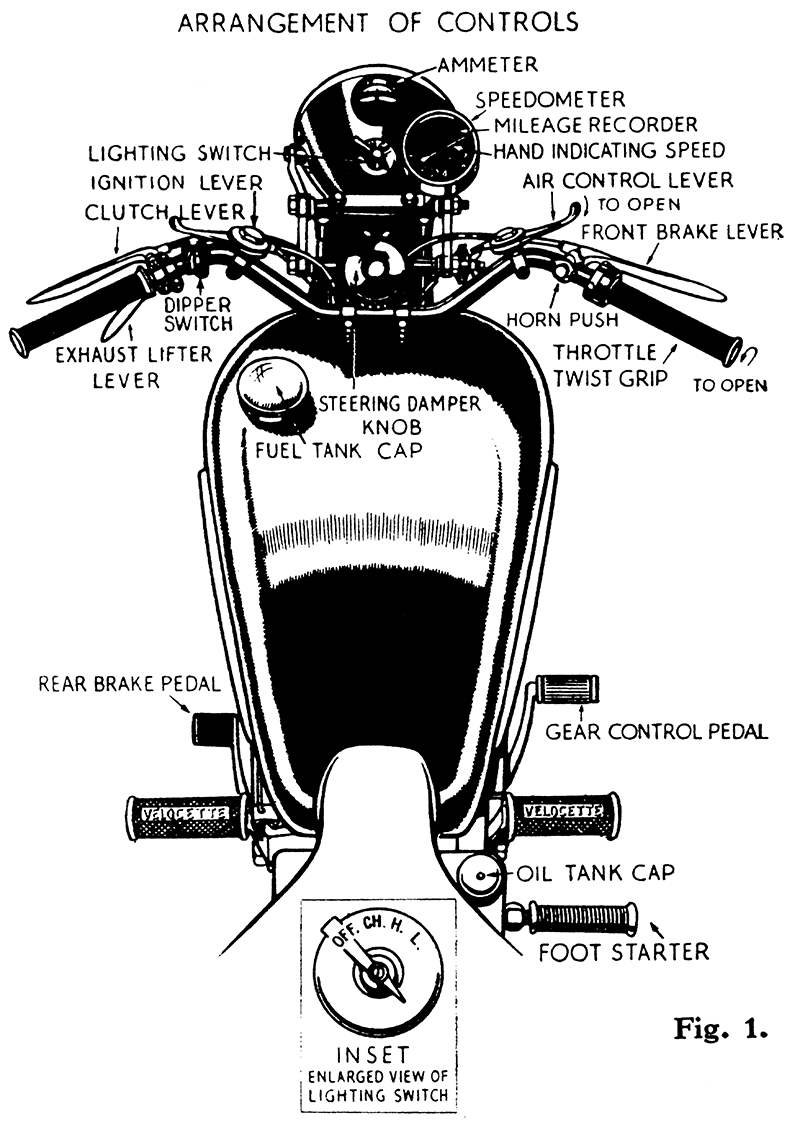 Clutch Lever. The larger of the two levers on the left side of the handlebar when pulled right back until it touches the grip disengages (or frees) the clutch, disconnecting the drive between the engine and the gearbox.

It must not be operated to ease the engine by slipping the clutch instead of changing to a lower gear, or be held up in order to "free wheel." Keep the hand off the lever when driving normally and do not hold it up with the machine stationary, and the engine running. If held up in a traffic block select neutral position for the gears and release the lever.

The control cable attached to this lever should move freely for at least before the pressure of the clutch springs is felt. This freedom will be likely to decrease with use, particularly on a new machine, or on one in which the clutch has been relined, particularly during the first few hundred miles' running.

Readjust as soon as this is noticed - as described on page 49.

Exhaust Valve Lifter. The smaller of the two levers on the left under side of the handlebar. When pulled towards the rubber grip causes the exhaust valve in the engine to be held off its seating and relieves compression in the cylinder. Its use (as described fully later) is for starting up. In certain conditions it may be used when the machine is being ridden slowly with low gear engaged down exceptionally steep or difficult gradients in order to prevent the rear wheel locking on a loose surface. It is not used in normal driving on main or secondary roads.

Steering Damper Knob. In the centre immediately above the steering column. Turning clockwise brings the friction discs of the steering damper together and stiffens the operation of the steering column in the steering head. In nearly all normal riding should be set so that the column is quite free. Tighten the damper a little at a time and gradually to assist in "holding" the machine when travelling fast on rough roads. Overtightening will give rise to a slow rolling movement of the motor cycle, particularly at slow speeds. If slackened back too far the star spring below the knob may rattle slightly.

The Air Control Lever. A small lever clipped to the top of the handlebar on the right. Pull back towards the saddle to open the air valve. For details of use see page 8.

The Front Brake Lever. Similar in appearance to the clutch lever, but fitted on the right-hand side. When pulled towards the grip applies the brake in the front hub.

The Horn Button. Fitted to the left of the brake lever. Press to sound the horn.

The Throttle. Operated by turning the right-hand grip. Movement back towards the rider opens the throttle valve in the carburetter and under most conditions increases the speed of the engine (and, when the gears and clutch are engaged) the speed of the machine. Keep the throttle closed when starting up. Movement of the twist grip when starting (familiarly known as "shaking the bottle") will nearly always cause difficulty in starting.

A small lever clipped to the top of the handlebar on the left. Movement of this lever varies the timing of the ignition in relation to the movement of the piston. In all normal running the timing is set fully advanced, i.e., the lever pushed fully forward. When the engine is being started the lever is pulled back for approximately two-thirds of its travel to avoid a back fire, and when on the road with the engine pulling very hard at comparatively low engine speed it may be necessary to move it back a little at a time to prevent "pinking," which is indicated by a series of sharp mechanical "clinking" noises from the engine particularly if running on low grade fuel.