Description and Explanation of Working.

The illustrations should be referred to for explanation of the following sections. The purpose of the carburetter is to atomise the correct amount of fuel with the air that is induced into the engine, and thus supply a correctly-proportioned mixture at all speeds within the engine's range at all throttle settings. 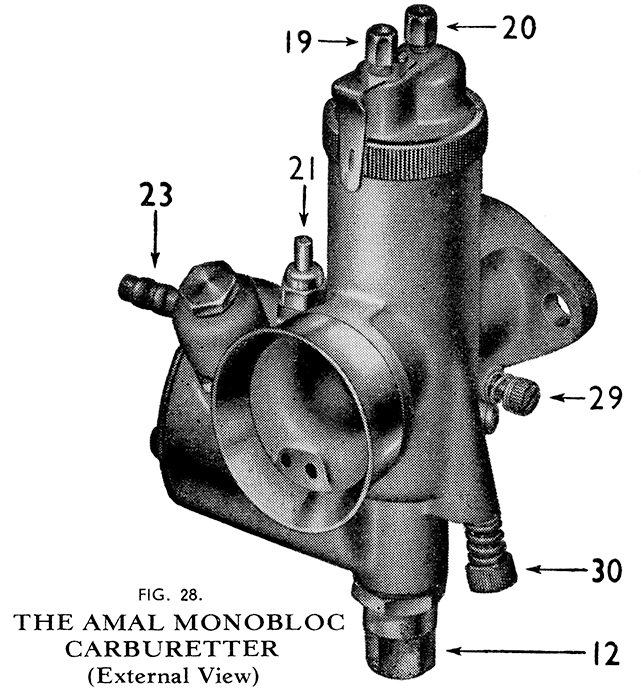 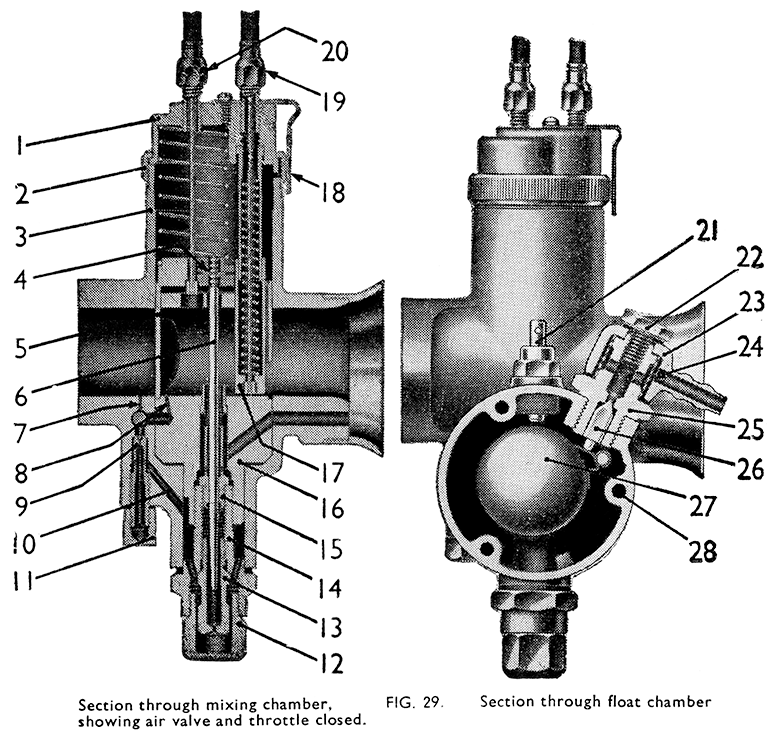 This is achieved by the selection of the correct size main jet, and main choke bore, in conjunction with the right adjustment or setting of the jet needle and the pilot jet.

A separately operated mixture control is also provided by the air valve, operated from the handlebar, for use when starting from cold, and until the engine is warm enough to accept the full air supply. This air control partially restricts the passage of air through the main choke.

Disconnect the fuel pipe, and unscrew the lock-ring from the mixing chamber. Pull out the throttle and air valves. Remove the carburetter from the engine. Unscrew and take out the float chamber locking bolt, preserving the gaskets from above and below the float chamber banjo. The float chamber is now free for dismantling.

The jet block will now be capable of being tapped out from the top using a wooden drift to avoid damaging it. It is most important not to use excessive force. Finally screw out the pilot air adjusting screw keeping the small coil spring which is fitted over it.

Should the carburetter have been flooding check the float for leakage by holding it close to the ear and shaking it. The presence of any petrol inside will be easily detected. Petrol can be removed and the lead traced by immersing the float in voiling water to vaporize the petrol which as it comes out in the form of vapour will show up the leak. Whilst it is possible to repair a leaking float by soldering it is not to be recommended except in a case where a replacement float is unobtainable, as it is impossible not to increase the weight of the float by the addition of solder. A replacement should, therefore, by fitted if a float is found to leak or is damaged.

Flooding may also be caused by a bent or damaged float needle or faulty needle seating. If the needle is bent or the seat worn hollow fit a replacement. If the seat is apparently reasonably good push the needle into place, and twist it backward and forward with the finger and tumble whilst holding it upright in the float chamber, and maintainning light pressure on the seating. Do not in any circumstances attempt to grind a needle into the seating.

Fit the main jet and needle jet, but when tightening remember that these are easily sheared off so that no excessive force must be used.

Refit the float chamber using a gasket at each side of the banjo, and fit the hollow bolt, but do not tighten it fully at this stage.

After the carburetter has been fitted to the machine, not forgetting the special heat insulating flange gasket, the fuel pipe may be connected to the tank and the float chamber lined up to meet the bottom union on the pipe. Connect up the bottom union loosely, tighten the hollow bolt whilst holding the float chamber firmly, and finally tighten the fuel pipe union nuts.

The jet is marked with figures indicating in cubic centimetres the quantity of petrol which it will pass in one minute under a standard pressure. Hence a smaller number indicates a smaller jet. 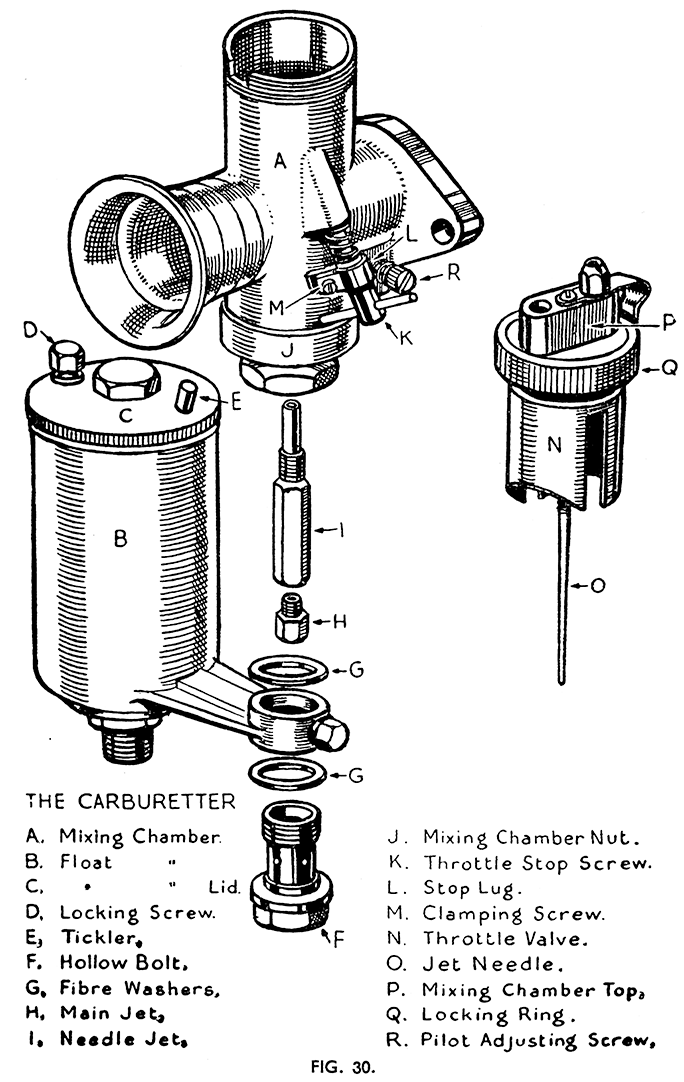 The throttle valve is marked with two figures at the top, these being separated by a stroke. The first indicates the type of valve, the second the height of the cut-away portion on the atmospheric side of the valve. measured at the centre, in sixteenths of an inch. Hence 6 /3 indicates type 6, with 3/16-in. cut-away, and 6 /4 : Type 6 with 4/16-in., i.e., ¼-in. cutaway.

The valve with the larger cut-away will provide a weaker mixture over that part of the throttle opening range that it controls.

It is inadvisable to experiment with settings differing from that recommended by us, and given on page 6, but the following information is given as being the standard proceedure advocated by Amal Ltd., and should be followed in the order given and studied in conjunction with the illustration (Fig. 31). By adjusting in the correct order any adjustments already set will not be disturbed.

The carburetter is automatic throughout the throttle range and the air valve should be kept full open in all normal running, and need only be closed for starting and until the engine begins to warm up.

1st—Main Jet with Throttle in Position 1.

Test engine for full throttle running. If power seems better with the air valve slightly closed this indicates too small a main jet.

2nd—Pilot Adjustment with Throttle in Positions 2 and 5.

Time will be saved if before making this test the pilot air adjusting screw is first screwed home fully and then set back 1½ turns. 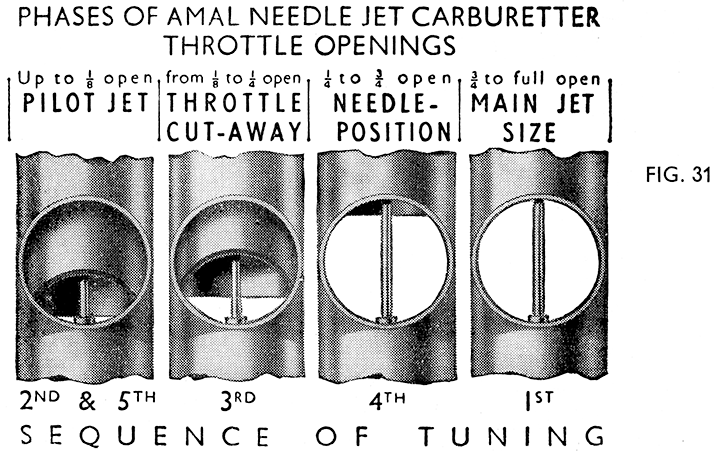 3rd—Throttle Cut-away with Throttle in Position 3.

If, on the throttle being opened with the engine idling, there is objection¬able spitting back from the carburetter, slightly richen the pilot mixture by screwing in the pilot air adjusting screw about a half turn. If this is not effective reset the screw to its original position and fit a throttle valve with the next smaller cut-away.

Should the running be jerky at this throttle opening and there is no spitting back either the throttle needle is set too high, or a larger cut-away is required to cure richness. After long mileage suspect a worn needle jet.

4th—Needle with Throttle in Position 4.

The needle controls a wide range of throttle opening and also the acceleration. Try the needle set as low as possible, i.e., with the clip in an upper groove. If the acceleration is poor and with the air valve partly closed is better, raise the needle two grooves. If very much better try again with the needle lowered one groove and finally leave it where it is best.

If the mixture is too rich with the clip in the top groove, the needle jet and possibly the needle are worn and must be replaced. The needle is found to wear less than the needle jet.

Go over the idling again for final touches.

Occasionally the carburetter may flood on turning on the fuel due to the float needle not seating. This can usually be rectified without extensive dismantling as follows : Turn off the fuel. Loosen the float chamber lid lock screw and remove the float chamber lid. Grasp the top of the float needle between finger and thumb and twist it backwards and forwards with a partly rotary movement, at the same time holding it up lightly in contact with the needle seating. After a few twists turn on the fuel again and if no flooding occurs, refit the lid, finally tightening the lock screw.

Excessive fuel consumption may be due to flooding, leakages from carburetter, pipe, or taps. Heavier consumption than normal may be caused by over-rich pilot air setting, particularly if the machine is used a lot in traffic, or by a worn needle jet and /or jet needle.

It is inadvisable to reduce the main jet size as this will almost certainly cause overheating and possibly pre-ignition. Further, the main jet does not control the mixture strength over that range of throttle opening in most frequent use.

Unsatisfactory running may not be due to carburation. If matters cannot be rectified by alterations to mixture strength, and it is known that the feed is regular and sufficient, or the carburetter is not flooding, the cause must be sought elsewhere. Defective or unsuitable sparking plugs or magneto trouble can in some conditions give similar symptoms to faulty carburation.

Always keep the fuel filters on the taps clear (Fig. 32) and see that the vent holes in the tank cap, and float chamber lid are clear. 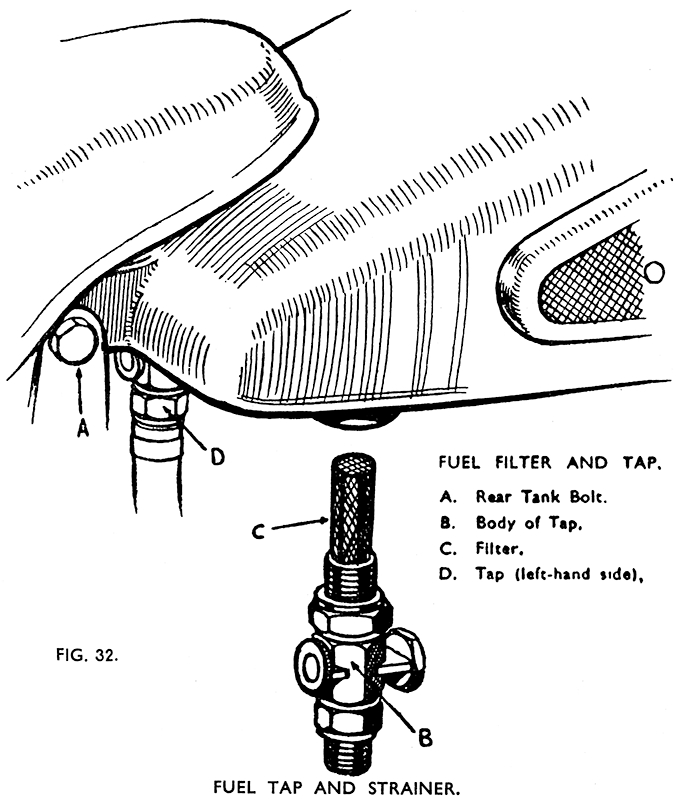