From the oil tank oil is taken to the feed side of a double gear pump in the crankcase, through a non-return ball valve fitted between the oil tank and the oil feed pipe (Fig. 5). The oil feed pipe is primed with oil during original assembly - in this connection refer to page 18.

The oil pump body carries two pairs of gears, one pair forming the feed pump and the other pair which are much wider, form the return pump and return oil to the oil tank after it has circulated through the engine. Due to the greater width of the return gears the feed cannot overtake the supply and cause the crankcase sump to become flooded. The pump is driven from a worm on the timing side mainshaft. 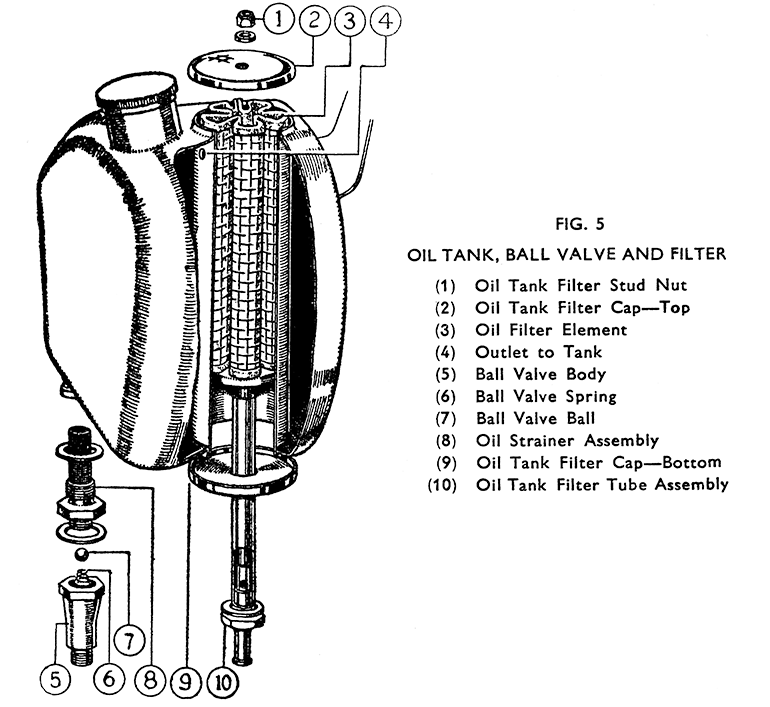 From the feed pump gears the oil is forced through a drilling in the crank-case to the timing cover in the face of which is a hole which matches with the outlet of the drilling in the crankcase. The timing cover acts as a distributor for the oil supply and carries feeds to the big end bearing through the crankshaft oil jet, to the cams, bottom rockers, and to the overhead rocker gear.

The feed to the cams and bottom rockers is through the cam oil jet, one end of which locates in a hole in the cover. The rocker oil feed pipe leading to the rocker cover is attached to a union at the top of the timing cover. By the removal of the oil pipe from this union it is possible to check whether the pump is working and it is essential that this check is made should the oil feed pipe or oil tank have been removed, or the oil-pipe emptied of oil. A fourth outlet from the cover feeds the cam wheel bush.

The piston, cylinder, and small end are lubricated by oil dissipated by the rapidly revolving big-end, and oil draining down the crankcase wall on the timing side is caught in a drilling leading to the intermediate gear bush. Both main bearings are kept constantly supplied.

From the bottom of the crankcase the oil is taken up to the return half of the pump, but before reaching the pump has to pass the Suction Filter (Fig. 6). The filter is formed by a plug screwed into the oil return passage at the bottom right hand rear corner of the crankcase. The diametric clearance between the filter plug and the passage is so small that it is quite impossible for anything which might damage the pump to pass.

The oil from the crankcase is piped to a connection under the oil tank, and passes up a tube inside the oil filter chamber in the tank, and after passing through a fabric filter element enters the main oil tank through a hole at the upper end of the filter chamber below the filler cap opening. (Fig. 5.) The fabric filter is easily removed for replacement and should be discarded and replaced by a new one every 10,000 miles.

Oil in circulation may be observed issuing from the opening in the filter chamber when the engine is running.

Owing to the use of a spring loaded non-return ball valve between the oil tank and the pump, the pump will not feed oil to the engine unless the feed-pipe is full of oil. After a normal spell of running this pipe will always be left full and priming is only needed during initial assembly, after a full engine overhaul, or if for any reason the oil feed pipe has been disturbed and emptied of oil.

After priming the oil pump, and before starting the engine it is essential to disconnect, temporarily, the union at the lower end of the overhead rocker oil feed pipe. A moment after starting the engine oil should be seen to be forced out of the union on the cover. Allow the engine to run for about two minutes at slow speed to make certain that the flow is continuous before stopping the engine and refitting the union nut.

In normal circumstances the flow may be checked occasionally by noting the oil returned to the tank through the hole in the filter chamber.

Bear in mind that this flow will usually be somewhat intermittent and irregular. It may be constant and greater than normal after starting an engine which has been stationary for some time, because an accumulation of oil which has had time to drain to the bottom of the crankcase off all the internal parts will be cleared. After this, and if the throttle is opened and the engine speed increased the flow may be observed to cease temporarily, only to resume again at a greater rate on the engine slowing down. This is due to the time taken for the suddenly increased amount from the pump, to get round the system and to find its way back to the oil sump.

These symptoms are quite normal, but it should be noted that if the oil filter chamber in the tank is not refilled with oil after cleaning the tank, or replacing the filter element, no return into the tank will be seen until the chamber has filled up to the outlet hole with oil pumped back from the engine. Also the level of oil in the main tank will be reduced by the amount trapped in the filter chamber. It is, therefore, advisable to refill the filter chamber as well as the tank during an oil change.

This is composed of a threaded union screwed into the oil tank carrying a gauze strainer (8) and formed to act as a seating for the ball (7), which is kept into contact with it when the engine is stationary by the spring (6) carried below the ball in the lower part of the assembly, the Ball-valve Body (5).

The purpose of the ball valve is to prevent oil from the tank draining into the engine by gravity through the pump when the engine is standing, as this would eventually flood the crankcase and make starting very difficult.

In the ordinary way the ball valve will seldom need attention, but if there are indications that the valve is leaking, such as excessive and pro¬longed smoking at the exhaust after starting up, or if the crankshaft is felt to be very sluggish to rotate on starting (provided that this is not due to excessive cold or the use of summer viscosity oil in cold weather) the ball valve assembly can be dismantled for attention. Excess oil can be drained from the crankcase before attempting to start if the ball valve has been leaking.

By holding the Ball-valve Body upright in the vice the strainer assembly may be unscrewed out of it leaving the ball and spring exposed.

Note that a gasket is used between the strainer assembly and the body and do not remove the spring needlessly. The body may be cleaned out with the spring in place.

The seating for the ball in the strainer assembly may be inspected, but if leaking, the strainer assembly should be replaced. The expedient sometimes adopted of tapping the ball sharply against the seating to bed it in is deprecated because this widens the seating, and consequently reduces the unit pressure of the ball upon it, making subsequent leakage more likely, and should only be used as a temporary measure.

When reassembling the strainer to the body see that the gasket is in place, and the ball resting on top of the spring. The ball must be above the spring as illustrated, otherwise the flow of oil will be cut off effectively with disastrous results to the engine. See Fig. 5 for order of fitting. If the spring has been taken out make certain that when refitted it is seated right home in the ball valve body otherwise the spring pressure upon the ball will be too high and prevent the ball opening when the engine starts.

Before starting the engine undo the union nut of the Rocker oil pipe and free the nipple. Start up and check the oil flow (see page 18). If there is no flow stop the engine at once, reprime the oil-feed-pipe and test again.

The oil pipe may be filled more easily if the banjo union hollow bolt is loosened to relieve air locks. Tighten up as soon as the pipe is full.

When all is in order refit and tighten the rocker-oil pipe union nut.

The Filter Plug (Fig. 6) should be unscrewed and removed for cleaning at intervals of 2,000 miles, or if at any time continuous and excessive smoking at the exhaust indicates that the crankcase is not being cleared satisfactorily of oil. Wash the plug in clean petrol, dry off and replace. Note that a gasket is fitted between the head of the plug and the crankcase. Make certain that this is in good condition and replace if faulty. Tighten the plug fully to eliminate air leakage.

The filter element should be renewed every 10,000 miles or less and the old one discarded. To replace the element it is not necessary to remove the oil tank, although if it is desired to wash out the tank this is easier if it is taken off.

When all oil has drained away, remove the nut and top cap and pull down the stud and bottom cap clear of the tank and take them away. Pull the old filter element out from the top.

Replace the tank drain-plug and refill the tank with oil.

Additives are unnecessary and should not be used.

If the oil feed pipe has been disturbed fill it with oil and check the circulation. See page 18.