These should operate freely without lost movement, and normally need no attention except for periodical lubrication. The adjusters for the Air Control Cable and the Throttle Cable are situated in the mixing chamber top. They are indicated as G1 and G respectively on Fig. 25. Turn anti-clockwise to take up lost movement.

To oil the cables remove them from the handlebar lever and twist grip, and, from thick brown paper make small funnels the small ends of which should then be tied round the ends of the casings. Support the ends as high as possible and fill the paper funnels with thin oil and allow the cables to remain in this way over night, when the oil will penetrate down the inside of the casing. 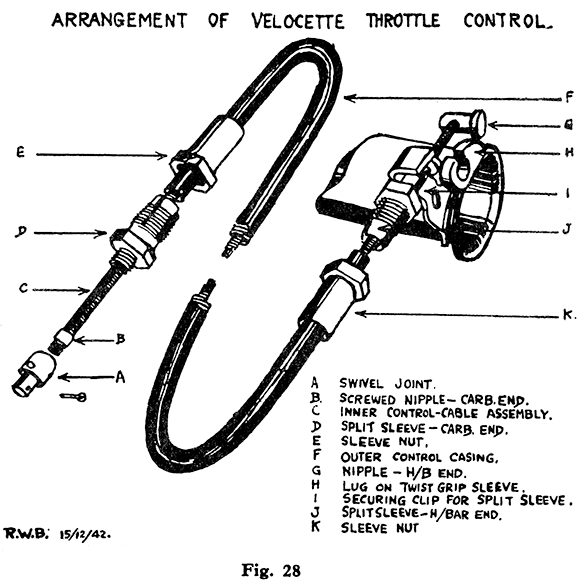 The Throttle Valve is operated by a push-pull cable from the Twist Grip and no spring is used above the throttle valve. To adjust the cable, first see that with the Twist Grip in the closed position the Throttle Valve is down as far as it will go in the mixing chamber—set the throttle stop screw back. See Page 63. Slacken off the sleeve nut E (Fig. 28), using a second spanner to hold the hexagon of sleeve D to prevent this turning. Slide the outer casing up or down in the sleeve until correct adjustment is obtained, and tighten sleeve nut E. Be careful to hold the sldeve D with a second spanner, otherwise it may be twisted off.

The cable may be lubricated as described previously, or may be com¬pletely removed from the casing and smeared with oil.
To remove cable take off the clip I (Fig. 28) securing sleeve J to the lug on the handlebar, and slip the cable nipple out of the " ear " on the Twist-Grip Sleeve. Unscrew the ring Q (Fig. 24) from carburetter and draw out both throttle and air valves. Pull out the small pin securing the Swivel Joint A (Fig. 28) to the valve. Unscrew the Swivel Joint from the nipple B (Fig. 28) and pull out the cable.