The engine oil must be changed at intervals not exceeding 2,000 miles running. (After the first 500 miles with a new or reconditioned engine). Do the work in surroundings as free from dust as possible, and when measuring out fresh oil to refill the tank see that measures and containers are scrupulously clean. Remove and clean suction filter. See page 16.

Refit filter and drain plug, and connect up the oil feed pipe. Pour in the clean oil (see recommendations, page 13) and fill tank to within 1-in. from top of tank (i.e., about 2-in. from the top face of the filler neck). Loosen the clip securing the oil return hose to the tank and pull the hose off the metal pipe. Obtain a tin or suitable vessel to catch the oil and start up the engine. Collect the dirty oil which will be forced up the return hose and when the stream begins to run clear, stop the engine and connect up the return hose again.

Occasionally remove the oil tank and swill it out carefully with petrol or benzol. DO NOT IN ANY CIRCUMSTANCES CLEAN THE TANK OR FLUSH OUT THE ENGINE WITH PARAFFIN.

The gearbox is lubricated with oil of the same " Summer " grade as that which is used for the engine.

To fill, remove the filler and level plugs, see Page 31. Pour in a small quantity of oil through the filler plug hole until it commences to run out of the level plug hole with the machine standing upright.

Allow the oil to run until the flow ceases and refit both plugs. If oil will run out of the level plug hole with the machine standing upright it is an indication that there is too much oil in the gearbox.

Too high a level will not prove detrimental, as the excess oil will only be likely to run into the primary chain cover, where it can of course do no harm. It cannot cause the clutch to slip if the clutch is adjusted correctly. After a new machine has covered 500 miles it is desirable to drain the gearbox. The drain plug is at the rear of the housing at the bottom. To remove any sediment that may have collected in the bottom of the gearbox it may be flushed out with clean petrol. This must all be allowed to drain away before refilling with oil.

Screw in the drain plug after the gearbox has been drained and re-fill with oil as described above.

In normal service the gearbox oil should be changed about every 5,000 miles. No other attention is necessary.

Heavy gear oil or grease will not find its way to the various bearings in a satisfactory manner, and may involve some part running dry with the consequent risk of seizure. For this reason therefore, such lubricants must not be used.

The front chain is enclosed in a sheet metal cover and a small quantity of oil is put into the chain case before the machine is tested. The oil should be replenished at intervals of approximately 1,000 miles, more oil being poured in through the inspection plug hole in the front part of the primary cover. This inspection cap is approximately above the left-hand footrest. It is usually convenient to squirt oil over the chain from an oil can while the chain is moved forward by the starter.

The rear chain should be lubricated from an oil can from time to time, and occasionally should be removed and put into a bath of paraffin to allow the paraffin to penetrate into the interior of the chain joints and also brushed well to remove all external dirt. It should then be given another bath in fresh, clean paraffin, and after being well shaken should be hung up to drain. The chain is then ready to be lubricated before being refitted to the machine. This may be done by soaking it in a bath of warm, but not boiling, graphite grease or tallow. The grease or tallow must be warm enough to be quite fluid. After allowing the chain to remain in the bath from about 15 to 20 minutes, allow the bath to cool down until the contents almost set, and then remove the chain, wipe off excess grease and refit it.

When re-fitting the rear chain, make sure that the spring clip on the connecting link is fitted so that the closed end of the link faces forward in the direction of movement of the chain. This is important.

When using the grease gun bear in mind that it is better to lubricate a little and often rather than to neglect this attention for a considerable time and then over-lubricate. In very wet or dirty conditions, lubri¬cation of the various points should be carried out more liberally. Should it be found that for some reason or another grease will not enter a bearing but escapes between the grease gun nozzle and the nipple, this can usually be prevented by inserting a piece of clean rag between the nipple and the grease gun nozzle. The rag forms an effective seal and will usually prevent all leakage but will allow grease to pass freely into the nipple. Do not use heavier grades of grease than are specified as there is a danger that the various bearings and bushes may not receive a proper supply due to the grease choking the passages, etc.

Two filters are fitted as a part of the fuel taps. To clean - drain fuel from tank into clean container. Unscrew both taps from tank. Clean filters in petrol. See that fibre washers on taps are in good order. Replace taps. 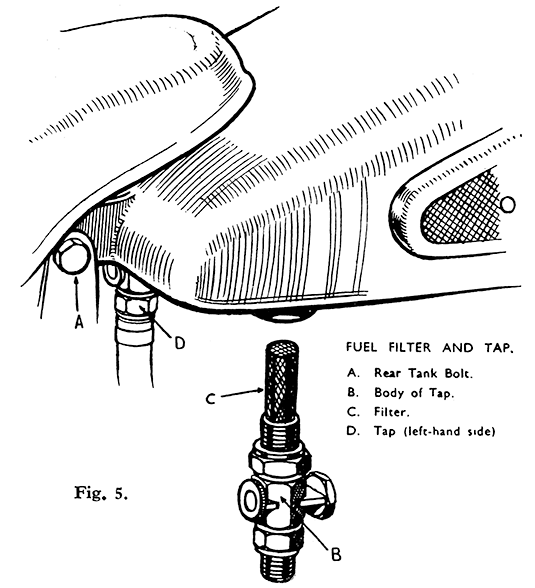