To remove the oil tank for cleaning purposes it is necessary first of all to disconnect the clutch cable, and this is done in the following manner :- 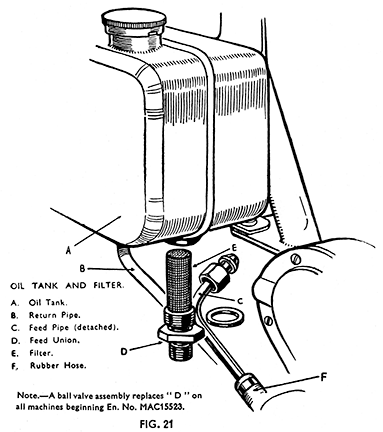 Screw out the cable holder, and slip this up out of place, and then disconnect the small cable nipple from the slotted connecting piece just inside the gearbox by sliding the cable sideways. The cable and casing will then easily draw upwards through the tube in the oil tank. Drain the tank by removing the drain plug or oil feed union.

The oil pipes should then be disconnected and finally the tank can be unbolted and removed.

It is held by one bolt at the top to the saddle lug of the frame and at the bottom is secured to the battery platform by a nut which is screwed over a threaded boss surrounding the tube through which the clutch cable passes.

Note particularly before removing the oil pipes the position in which they are fitted so that they may be re-fitted in the correct way. (See Fig. 16).

The oil return hose is connected to an adapter under the bottom filter chamber cap (on earlier machines direct to a pipe welded to the tank).

Warning. Except on machines which do not have the ball valve underneath the oil tank (MOV and MSS rigid frame models and MAC models previous to engine MAC15523) the oil pump must be primed before starting the engine (see page 13).

In order to clear as much as possible of the dirty oil out of the engine it is best, after refilling the oil tank, to leave the return pipe hose disconnected and start up the engine.

The dirty oil will be pumped up through the rubber hose and can be caught in a suitable container and ultimately discarded.

If possible, always avoid disturbing the hollow bolt which secures the copper oil feed pipe to the crankcase below the pump, as it may be difficult to get the pipe oil-tight again if this is taken off.

Be careful when tightening this hollow bolt not to use excessive force or it may be broken.