The clutch is operated by a thrust cup carrying a thrust bearing instead of by the more usual single thrust rod operating through a hollow gear shaft as on the LE model, and most other makes. The adjustment which becomes necessary periodically to allow for settling and wear on the friction linings is made by means of the screwed clutch spring holder threaded into the front plate of the clutch, and not by alteration to the cable adjustment. A cable adjuster is fitted, but this is used for controlling the cable adjustment only and must not be used as a "first aid" remedy for a slipping clutch.

Before attempting any adjustment to the clutch it is important that the operation of the clutch is properly understood and the following explanation should be studied by anyone unfamiliar with the design.

The operating mechanism is shown diagrammatically on page 27 (Fig. 11).

The movement of the handlebar lever (A) raises the operating lever (F) in the gearbox and the raised tip of the lever forces the large thrust pin(G) against the projecting lip of the thrust cup (J), causing the thrust cup to hinge outwards with the opposite side acting as the fulcrum.

If the outer clutch plate is observed whilst the handlebar lever is operated, with the clutch stationary, the plate will be seen to tilt outwards, as only that part of the plate nearest the thrust pin side of the clutch is freed from contact with the friction linings. 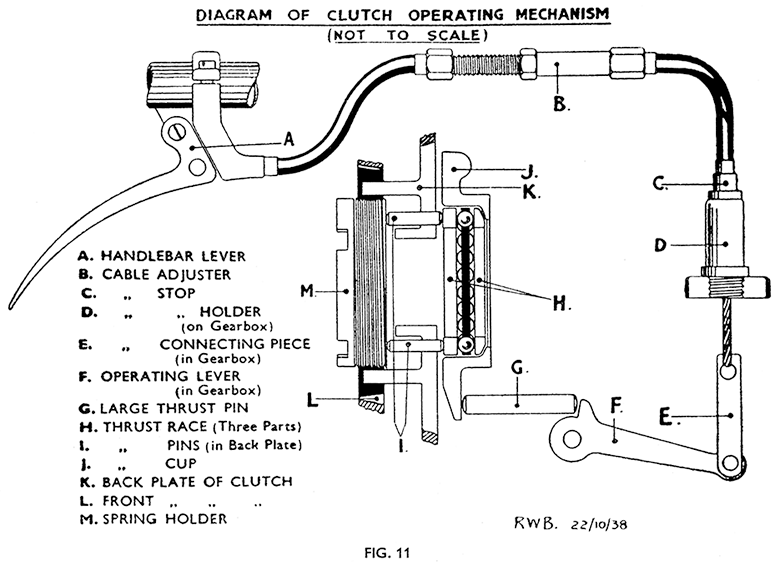 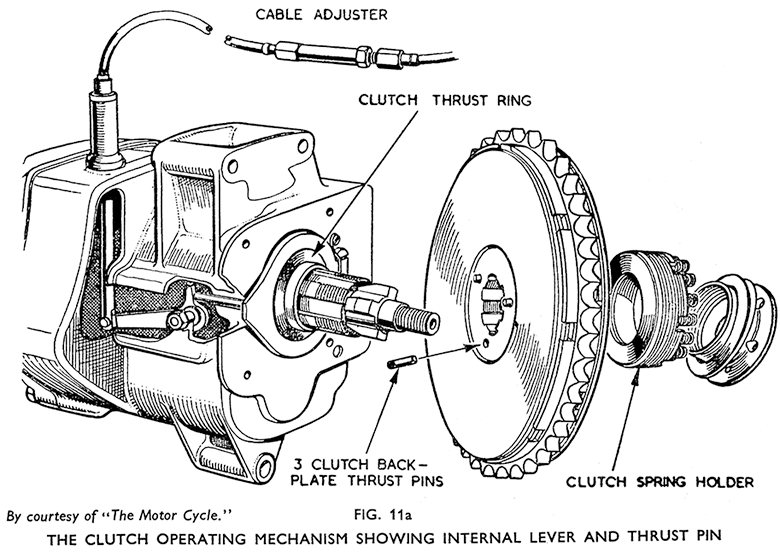 For the clutch to become fully disengaged the plates have to complete one revolution, after which the spherically seated, self-aligning ball thrust bearing (H) seated in the thrust cup levels the plates and frees them from the friction linings.

The thrust pins (I) are fitted freely in holes in the back plate (K).

Because of the tilting of the front plate the plates are " peeled off " from contact with each other so that when correctly adjusted and maintained this type of clutch does not cause the unpleasant grating of the gears on starting away which is often noticeable with other makes.

It will be understood that in normal use and a condition of correct adjustment the thrust pins and thrust bearing are free of all thrust loading. It will also be noted that settling or wear of the friction linings will allow the outer plate (L) to close in slightly towards the backplate (K) due to the reduction in friction lining thickness. As the thrust cup (J), when not in operation, is held against its seating and the face of the gearbox by a spring clip (not shown), it follows that the initial freedom in the thrust bearing and thrust pins will gradually be reduced, until a stage is reached in which, if adjustment is not carried when needed the thrust pins and bearing will be carrying part of the pressure of the clutch springs. The result will be clutch slip and premature wearing of the thrust bearing.

In such circumstances adjustment has to be made to the clutch spring holder (M) which must be turned forward (anti-clockwise) in relation to the front plate (L) to restore free movement in the thrust mechanism.

Only in special circumstances, as described later, is adjustment of the clutch cable midway adjuster required. 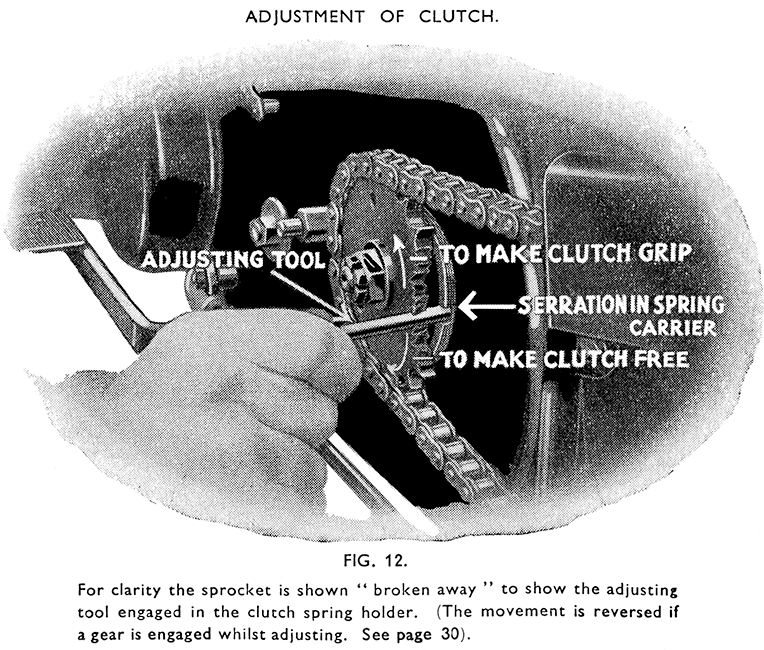 To use the adjusting peg in the sprocket the front section of the rear chain guard has to be detached from the primary chain case. The chain guard is marked to indicate the need for its removal.

The adjustment is made normally with the gears in neutral, and only in an exceptional case is it made when an indirect gear is engaged. Such contingencies will be dealt with later.

To prevent clutch slip, i.e., to increase free movement in the operation, pull the rear wheel forward so that the final drive sprocket and adjusting tool will move the clutch spring holder forward in relation to the clutch front plate.

Should the clutch fail to free properly after this adjustment, the clutch cable adjustment may need a little correction : see next section.

Adjustment of Clutch on New Machines or after fitting New Cable Assembly.

The adjustment of the clutch is correct when a new machine is despatched from the factory, but the friction linings (clutch inserts) may settle during the first few hundred miles running, and readjustment may be needed fairly soon.

The clutch cable adjustment seldom needs attention after the initial compression and settling of the outer casings and ferrules of a new cable assembly has taken place. The control cable itself does not stretch, but very slight shortening of the total length of the casings may occur with new parts and has the same effect as a lengthened inner wire.

A careful watch should be kept on the clutch lever during the running in period of a new machine, if the clutch has been relined, or a new cable assembly has been fitted.

The settling down of the clutch inserts allows the clutch front plate to close in gradually towards the back plate and reduces the freedom allowed in the thrust bearing during assembly.

This in turn causes the control cable to lose some free movement. On the other hand any shortening of the control cable casings due to com¬pression will tend to hide the fact that the inserts have settled and clutch slip is possible even whilst there is still some lost motion in the cable.

It is recommended, therefore, that during the service check normally carried out after the first 500 miles running, the clutch adjustment should be dealt with by carrying out a series of operations, each very simple, exactly as described later and in the order given.

With the clutch in correct adjustment it must be possible to pull back the clutch lever quite freely, and without operating the clutch at all, far enough to move the inner wire (or clutch cable) ¼-in. to 3/8-in Should this free movement be seen to have decreased, re-adjustment must be made at once.

The sequence of operations for adjusting as mentioned previously is as follows :

Operation 1. - Slacken off the midway cable adjuster fully to allow the nipple to be detached from the handlebar lever and slip it out of the hole in the lever.

Operation 2. - Open both throttle and air controls fully. Select neutral position of the gears, and depress the kickstart against compression and test for clutch slip. If the clutch is felt to slip omit Operation 3 and carry on with Operation 4.

If no slip can be felt carry on with Operation 3.

Operation 3. - Using the clutch adjusting peg as already described, pull the rear wheel backwards a quarter of a turn at a time checking for clutch slip after each movement. This will involve taking out the adjusting peg from engagement with the clutch spring holder before each test. As soon as the clutch can be felt to slip (and only just slip), proceed with Operation 4.

Operation 4. - Refit the cable nipple to the handlebar lever. Readjust the midway adjuster until all lost motion is taken out of the cable and the lever is just drawn up against the lever bracket on the handlebar. Do not force the adjuster but only just remove all play. When correct tighten the cable adjuster locknut.

Finally, refit the adjusting peg to the sprocket, engage it with the clutch spring holder, and pull the rear wheel forward a little at a time until free movement begins to appear on the cable when the handlebar lever is checked.

The adjustment is now completed.

Although the foregoing may seem complicated at first sight the whole " drill " is both easily and quickly carried out, and after the initial settling of a new cable assembly has taken place is only likely to be needed in special circumstances, as for instance if it is not known whether adjust¬ment is needed to the cable or the spring holder. The effect of the two adjustments is inter-related.

If in doubt as to whether the cable or spring holder should be adjusted
the following should be referred to :-

It can be accepted that if clutch trouble is not eliminated by carrying out the " drill " exactly as described the clutch will have to be dismantled to attend to a mechanical fault, to rectify incorrect assembly, or to replace worn parts.

Engage either second or third gear, and after passing the adjusting peg through the sprocket, move the clutch by means of the kickstart until one of the notches in the spring holder is opposite the peg and engage the peg in the notch.

To make the clutch grip move the rear wheel backwards. This is the opposite direction to that used when adjusting with the gears in neutral.

By adjusting with an indirect gear engaged advantage is taken of the difference in the rates of movement of the clutch sleeve gear (to which the clutch driven plates are attached) and the final drive sprocket.

Oil in the Clutch.

The primary chain case is intended to carry enough oil to lubricate the chain, and the clutch will grip satisfactorily even if there is an excess of oil in the cover provided that from the outset the cover has had oil in it.

It has been found however, that a clutch which has been run completely free of oil over a period will be subject to slip if oil is subsequently introduced on to the friction surfaces. In such circumstances the clutch must be relined, and assembled with oil in the cover.