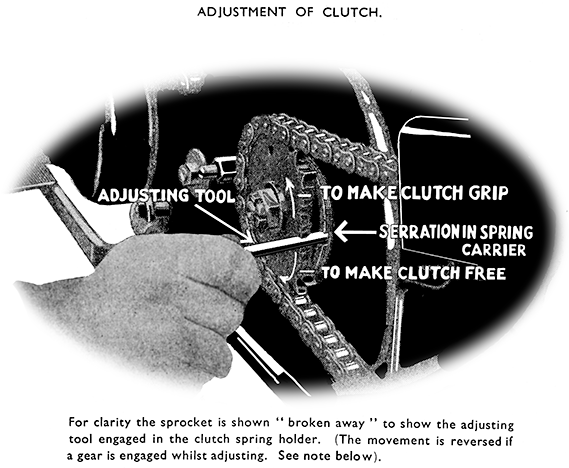 Adjustment on New Machines. The clutch is correctly adjusted when a new machine is despatched from the factory, but during the running in period the friction linings and cable assembly may bed down and adjustment may be needed fairly soon.

In the ordinary way and after everything has settled down the cable adjustment does not require alteration, and any wear upon the friction surfaces is taken care of by adjustment of the clutch spring holder only. Illustration page 43.

It is, therefore, recommended that when the machine is checked over by the Dealer after the first five hundred miles running the adjustment should be carried out by follow¬ing faithfully the sequence of operations detailed later (page 44)

During the running in period, or if the clutch has been relined, or a new cable assembly fitted, keep careful watch on the clutch lever for any alteration in free movement, and also look out for clutch slip.

Adjustment of Clutch. In normal working and except in circumstances stated above, adjust the clutch as follows :

Insert the clutch adjusting tool through the hole in the sprocket, and with gears in neutral, move the rear wheel until the tool will engage in one of the notches in the edge of the clutch spring holder behind the sprocket. The tool is a ¼" diameter steel rod cut with a flat at one end. The flat allows the rod to clear the sleeve gear nut. See illustration, page 43.

To increase the freedom in the operating mechanism, that is to cure slip, turn the rear wheel forward until there is between 1/8" to 3/16" in free movement on the control cable at the handlebar end.

Note. - It has occasionally happened that due to neglect of the adjustment a clutch has reached such a condition that the clutch spring holder has refused to turn in the clutch front plate and carries the plate around with it, making adjustment in the ordinary manner impossible.

Adjustment of Clutch—Sequence of Operations. The following "drill" is recommended when the Service Check is made after the first 500 miles use, and should be followed if at any time it is not evident whether adjustment is needed to the cable or the spring holder or to both.

Operation 1. Fully slacken off the midway clutch cable adjuster and slip out the cable nipple from the handlebar lever. This is often made easier by removing the lever pivot pin.

Operation 2. Fully open the throttle and air controls. With the gears in neutral depress the kickstart against compression. If the clutch slips omit Operation 3 and carry on with Operation 4.

Operation 3. With the clutch adjusting tool engaged with the clutch spring holder as already explained, pull back the rear wheel a little at a time checking for clutch slip after each movement, being sure to remove the adjusting tool before checking. As soon as any slip can be detected, proceed with Operation 4. Only the slightest perceptible slip is required.

Operation 4. Refit the cable nipple to the handlebar lever and refit the lever if it was previously removed. Readjust the midway adjuster to take up all play in the cable. Do not force the adjuster, but only just remove all play. Tighten the adjuster lock-nut.

Use the adjusting tool again, and pull the rear wheel forward a little at a time until the cable can move freely in its casing for 1/8 to 3/16". 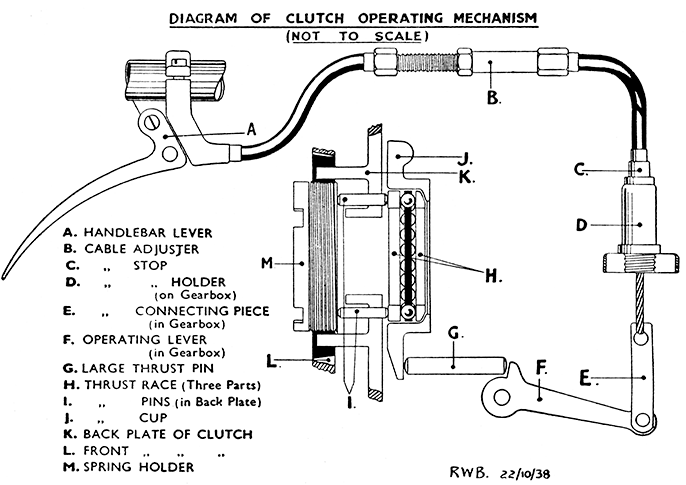 The following will help if the owner is doubtful what adjustment to make :

Remedy : Carry out the full adjustment drill. Operations 1 to 4.

* In case the slip is excessive and prevents adjustment in the normal manner refer to note on page 43.