All Model MOV (and MAC machines supplied before 1941) have single plate cork-lined clutches. The method of dismantling is similar.

Begin as described on page 53 for dismantling the engine-shaft shock absorber and remove the whole clutch from the sleeve gear. Do not lose the three small thrust pins from the back plate. The front plate will now lift off, exposing a steel plate fitted with friction inserts ; remove this and the steel " dished' plate below it. Slide the chain wheel and ballrace off the centre of the back plate. The ballrace should remain in the chain wheel and is intended to be a light push fit on the centre. Only one steel plate and an " inserted " plate remain to be lifted off. The clutch inserts, of which there are 66, will not need renewal unless they are worn down flush with the steel, or are very loose in the holes. The ball race should run freely, and should be fairly tight in the chain-wheel. The inserts are of Ferodo on the MAC and MSS and cork on the MOV.

The removal of the clutch will have exposed the thrust bearing. This consists of three parts. First, a flat thrust ring, followed by a caged ball thrust bearing, and finally a thrust washer having a flat face to provide a bearing for the balls, and a convex face on the other side which seats in a concave surface in the thrust cup. The thrust cup need not normally be removed. See that the flat bearing surfaces are free from pitting, and that the balls are in good order. If needed, fit new parts. The plain thrust may be reversed if worn on one side only, and will be quite satisfactory. The distance piece on the sleeve gear may be inspected, and if worn should be replaced. See that the brass cage of the ballrace is quite free upon it before assembling.

Refit the three parts of the thrust race in the following order : Spherical washer with convex face against the thrust cup, followed by the ball thrust, and finally the plain thrust. ring. Coat all these parts with grease when fitting.

To re-assemble the clutch lay the back plate, working surface upwards, on the bench, or obtain a used sleeve gear off any single cylinder Velocette, hold this by the driving dogs in a vice and mount the back plate upon it over the splines. Place one of the " insert " plates in position, followed by one of the steel " dished " plates. The projections on the inside of this plate must be engaged in the notches in the back plate. Take up the chain wheel and see that the ballrace is free. Press a little grease into the race and turn it round once or twice to distribute the grease. Slide the chain wheel and race over the centre of the back plate and turn the chain wheel until the notches on the outside engage the projections on the " insert " plate underneath.

The second " dished " plate is now fitted with its projections facing upwards.

Place the second " insert plate in position, making sure that its outer projections fit into the recesses in the chain wheel. Finally place the front plate in position. It is occasionally difficult to fit this at the first attempt, as it is not possible always to locate its recesses over the projections on the " dished " plate, which, of course, cannot be seen when the front plate is lowered into position. By manoeuvring the chainwheel backwards and forwards, however, it will usually drop into place after one or two attempts. Screw the spring-holder into place if it has previously been taken out. Lift the whole Clutch, being careful to hold the back and front plates together firmly, and smear a little grease into the holes for the three Thrust-pins. Put the Thrust-pins into place - the grease will hold them. Engage Top gear (to prevent the Sleeve-gear slipping back into the Gearbox) and slide the Clutch into position on to the splines of the Sleeve-gear.

Fit the Clutch-springs, setting them in position so that the ground edges of the Springs are on the outside of the Holder. The Spring-holder must be screwed in until it contacts the ends of the three Thrust-pins. Provided the Sleeve-gear is pushed well up into its Ballrace, i.e., has not been allowed to slip back into the Gearbox, the Sleeve-gear Nut can usually be started on the threads without having to compress the springs very much. There is a Service Tool X2959 for the job. See Fig. 34.

Tighten the Sleeve-gear Nut tightly with the Peg-spanner finishing by driving the Spanner round, and when tight refit,the Locking-plate and Set-screw. 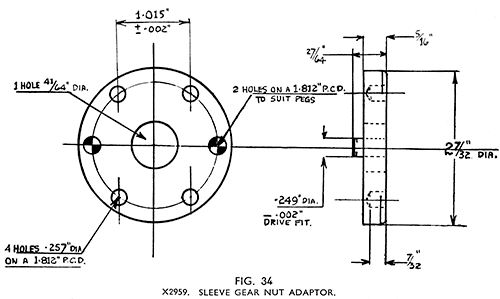